This application shows how to build Akka application with Spray API. In this tutorial, I am going to use Spray's spray-can, spray-httpx, spray-json artefacts with the Akka artefacts to build an application that receives HTTP requests with JSON payloads, unmarshals the JSON into instances of our own classes (case classes, to be exact). It then sends these instances to the appropriate Actors for processing. When the actors reply, it marshals the responses into JSON, and uses that to construct the HTTP responses.

I shall also explore the Cake pattern, which enable us to separate out parts of the system so that I can "assemble" the parts of the cake into the components that I ultimately run or test.

Let me begin by showing the overall structure of the application we are building. 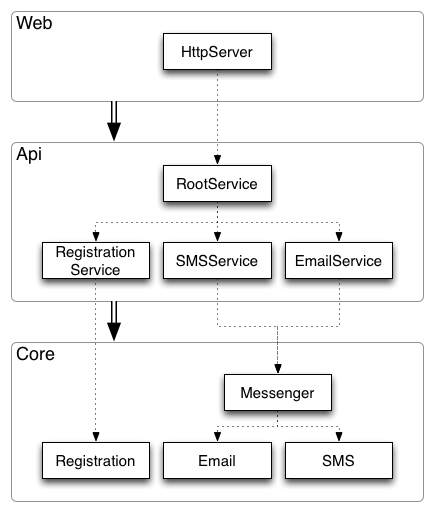 In this template & tutorial, you will learn how to construct Akka-based applications; how to test them (using TestKit and Specs2; and how to provide RESTful HTTP API using Spray.

The top-level actors live in the CoreActors trait. This trait's self-type annotation defines that instances that mix in this trait must also mix in some subtype of the Core trait.

This is a rather long description of the first two lines of the CoreActors trait.

Because of the self-type declaration, I have access to all members of the Core trait in the CoreActors trait. Our Core trait defines only one member, namely implicit def system: ActorSystem; and I use the system to create the top-level actors.

The CoreActor in its entirety is therefore

As you can see, the BootedCore is a straight-forward implementation of the Core trait. If I now wanted, I could write a simple application that starts our actors by mixing in the traits.

I must be mindful of the initialization order, though. It would be an error to write object Cli extends App with CoreActors with BootedCore!

Having to worry about the order in which I mix in the traits is wholly unsatisfactory. I need to find a way in which a val can be evaluated immediately when its value is required, but once it is evaluated, it behaves like an ordinary val. Rephrasing, I want a member whose value will be computed and remembered on first access, and subsequent accesses will return the remembered value.

To do this in Scala, I mark the val as _lazy_. Thus, our BootedCore's system becomes

Notice the lazy keyword--now I am free to mix in the required traits in any order.

Let's now explore why I did so much code gymnastics. I could have just as easily defined the CoreActors trait to contain all the code in Core and BootedCore.

The motivation was testing. When I am using Akka's TestKit, we construct a test-only ActorSystem. This testing ActorSystem allows us to test the actors as if the messages sent and received were method calls. In other words, the ActorSystem in our tests uses the CallingThreadDispatcher, making the message delivery synchronous.

As it happens, the TestKit contains a member called system: ActorSystem; and it matches the Core trait. Therefore, it is easy to make our specification implement the Core trait. This in turn means that our test satisfies the self-type annotation of the CoreActors trait.

And thus, I can easily write a test for our entire application's structure.

I extend the TestKit class, which gives us access to all the underlying Akka's test mechanisms; I also mix in Specs2's SpecificationLike, which gives us the convenient DSL for writing our test scenarios and assertions. Finally, because I am writing code to test my actors, I mix in the CoreActors and Core traits. I do not need to do any more work, because the member system: ActorSystem fully implements the Core trait. However, I need to implement the Core trait to satisfy the self-type declaration of the CoreActors.

I could have defined Core to be structural type, in which case, I would not have to worry about implementing Core here. If you want to try it out, remove the trait Core { ... } and replace it with

Here, the Core type is a structural type, which says that Core is anything which contains the system: ActorSystem member.

I begin with the RegistrationActor. Its purpose is to register the users in our system. The actor's companion object holds all the messages that the actor deals with. In code, the structure is

This structure allows me to tidy up the messages and perhaps some utility functions in the future from the actor itself.

Onwards to the actor's implementation, then. As I said, it will be rather trivial, mainly demonstrating approaches &amp; patterns. When it receives the Register message, it performs the required processing and then replies to the sender with the outcome of the registration process.

I will show the integration test approach here.

To allow us to examine what happens in our actors, I need to use special--crippled-- ActorSystem that processes the messages synchronously. To the code, then. We extend the TestKit class and mix in the required traits to construct the test.

This is the entire body of our test. I instantiate the actors in CoreActors, satisfying the Core self-type annotation by having the RegistrationActorSpec implement the Core trait. (Remember, I can do that just by writing with Core, because TestKit already contains the member system: ActorSystem, which is all that is needed to fully implement Core.)

Onwards. If you run the test, it will fail. It will complain about failing timeouts, namely

And yet, if you place a breakpoint in the RegistrationActor's receive, you will see that it is indeed executing; replying to the sender with the appropriate message.

The only conclusion is that the sender itself is somehow broken. Indeed. Going back to our test, I write registration ! Register(mkUser("")). If you explore the ! function, you will see that it is a curried function, whose first parameter list is the message to be sent, and its second parameter list is the ActorRef which represents the sender. It is marked as implicit, but it also contains a default value. So, if no ActorRef instance is available implicitly, the default value will be used instead. Unfortunately for me here, the default value is Actor.noSender.

To fix the problem, all I need to do is have an implicit ActorRef value. However, this ActorRef should also somehow interact with the rest of the code in TestKit. Furtunately for the lazy, TestKit provides the ImplicitSender trait, which makes the testActor implicitly available; and the testActor interacts with all the expect... functions in TestKit.

I mix in the ImplicitSender and all is good!

I am going to use most of the Spray components, namely

This feels like quite a handful, but you will see that the code is rather succinct and, of course, type safe. Even more importantly, the Spray code does not interfere with the core of our system. The core can remain completely oblivious of the way in which it is exposed.

I continue to strictly separate the layers of (even if so trivial) application; therefore, I will separate the REST API from the code that starts the HTTP server hosting the API. In keeping with the rest of the system, I will split the layers into traits, giving me the Api and Web traits. As you can guess, the Api trait contains just the REST API, and the Web trait exposes the APIs in a real HTTP server.

All of this to enable me to write tests that exercise just the REST API, without the need to start the HTTP server and deal with the added complexity of real HTTP requests; and to allow me to write a subtype of App that combines all the components and starts a real HTTP server; server, which hosts the API, which in turn uses the core actors to do the heavy processing. In code, the entire application is just one line:

Let's explore the Api trait, which defines the REST endpoints. In keeping with the structure from the diagram, I have kept each endpoint in its own class. The Api trait constructs the classes for these endpoints and then concatenates the routes they each expose. The RoutedHttpService then routes the incoming HTTP requests accordingly.

Before I begin to worry about the marshalling and unmarshalling, let's deal with the actual HTTP requests. Spray-can deals with the low-level I/O of asynchronous HTTP (and SPDY!) server; it then turns the HTTP requests and responses into HttpRequest messages; the response sent to the sender is the HttpResponse, containing the response entity, headers, etc.

Spray-http deals with convenient routing so that I don't have to implement actors that receive HttpRequests and reply to the sender with the raw HttpResponses; spray-httpx adds the marshalling and unmarshalling support. 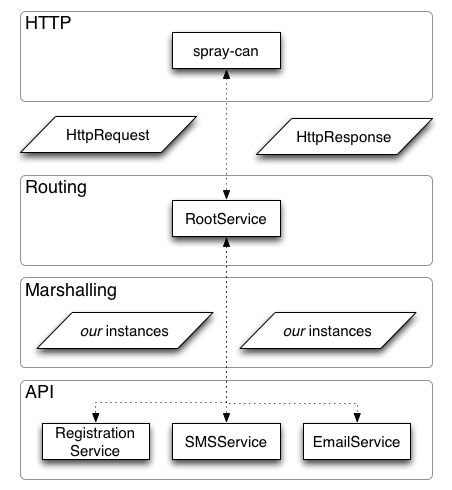 Let's start working on the RegistrationService. I will begin by using the routes.

This is a good start. It clearly demonstrates the ease of Spray's routing. I say that on path register, on HTTP method POST, I complete the request with body "OK". Unfortunately, the string "OK" doesn't quite meet our requirement. To do so, I need to interpret the request as instance of Register and turn our Either[NotRegistered.type, Registered.type] into the response.

All of this requires some marshalling jiggery pokery. Firstly, I need to be able to turn the HTTP requests into instances of our types and then I need to be able to do the reverse. Spray provides pluggable marshalling mechanism to do that. The instances of the typeclasses Marshaller[A] and Unmarshaller[A] are responsible for performing the request entity -&gt; our instance and our instance -&gt; response entity transformations.

I will not get into a complex discussion of typeclasses; I will just say that typeclass defines behaviour for a certain type and a typeclass instance is the implementation of such behaviour. Spray includes the spray-json library, which, together with the SprayJsonSupport trait allows me to wire in spray-json marshallers and unmarshallers and use them in my Spray code.

Without further delay, let me show you how it's done in code and then explore the details.

Looking at the route definition, the only difference is that I changed complete to handleWith; and then wired in the call to our RegistrationActor.

Reading the code intuitively, I say that to handle requests to register on HTTP method post, I turn the request into Register and then handleWith a function that returns a Future[Either[...]], which we turn into a response.

Intuition did not fail us. All I have to do is to implement the behaviour of turning the requests into our types and our types into responses. So, instances of typeclasses! Those are the mysterious lines

And breathe! Now, I have a function errorSelectingEitherMarshaller[A, B] that returns Marshalle[Either[A, B]]. To be able to do that, it must know how to marshal A and B; and if I want to be able to indicate the status code, I must also be able to turn As into StatusCode. That's what the three implicit parameters do: I am asking the compiler to implicitly find an instance of Marshaller[A], Marshaller[B] and ErrorSelector[A]; in other words, instances of the Marshaller and ErrorSelector typeclasses for instances A and B.

To use, I must give the typeclass instance for ErrorSelector[A], where A is NotRegistered.type; I do so by defining a singleton:

To complete the picture, I must implement the Web trait, which takes the rootService in the Api trait and hosts it in the spray-can HTTP server. The good news is that the code gets simpler:

I create the Http extension, pass it to Akka's IO machinery; and finally send it the Http.Bind message to bind the rootService to all interfaces, on port 8080.

I am excited to present the final application that combines all our components in an HTTP server. It is

That's all there is to it. I have created an App, mixed in all required traits and we're good to go.

Put a file in /templates-hidden/include.html to update the page